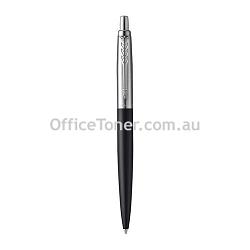 Parker Jotter XL Matte Black Chrome Trim BP Pen bears all the hallmarks of the iconic Jotter, but with the length and diameter increased by 7% to offer an enjoyable writing experience for those who prefer a larger ballpoint pen.

Parker IM Premium BP Red with Gold Trim with its sleek tapered shape makes it a striking personal statement as well as a memorable gift. Ink Colour: B ... more

Be the first to review this item.

All orders are despatched ASAP from distribution centres in Sydney, Melbourne, Brisbane, Adelaide & Perth. As a general guide, deliveries to major cities and towns will arrive in 1 - 3 working days whilst it could take up to 5 working days for remote areas. A dispatch note will be sent to your registered email address for tracking. The delivery to PO Box or Parcel Locker is available for printing consumables and small items. The store pickup is not allowed.

Rosemary
May 17, 2012
I would like to Thank Office Toner & their Staff for the prompt service, I have always found that even tho' I order over the internet, I have always h ... more
Jan P.
April 10, 2014
I just want to say thank you for such prompt delivery. I ordered late last night and it arrived today. Can't believe it. Thank you again.
Ann P.
May 16, 2017
Sincere thanks for a great service.....
Cheers,
Ann.

Lloyd V.
November 20, 2014
Very professional service! I have been with Office Tonner for over a year now and can recommend these people to everybody looking to buy printer produ ... more
Peter W.
November 26, 2013
Absolutely amazing. The best service I've ever had. My order actually arrived before the notification did!! N.S.W. to Melbourne in approx. 12 hours I ... more
Wilson S.
April 24, 2014
Thanks for the fastest delivery that I ever had before. Well done.
Lyn P.
February 27, 2009
Wow - this is the fastest delivery I ever received!!!!!
Delivery guy had to come back later in the day, because as I was not expecting the parcel tha ... more
Wenjun (Vicky) L.
October 09, 2019
Fast delivery. Cheap price.
Michal L.
December 30, 2013
I'm a regular customer for Epson inks because they're price competitive and service is efficient. If you were to waive the $7.90 freight charge for or ... more
Ken L.
September 30, 2015
Dear Sir/Madam,

I cannot believe the service that your company provided to us. We rang on 28/09/15, very late in the afternoon, & I was astounded ... more

Thank you so much, I am really glad that I order through you guys.

The quality and effienciency is fantastic. Great Co ... more


Andrew B.
June 06, 2014
Let me start by saying that because of price I always buy from Officetoner. My toner ran out Thursday afternoon & after a visit to Officeworks found o ... more
Eileen D.
October 09, 2013
I've been buying my ink cartridges from Office Toner for more than three years now, and the service has always been excellent. I've never had an onlin ... more
James T.
April 09, 2020
I ordered in Perth on Tuesday afternoon at 3pm, two toner packs were delivered to my door 22 hours later - that's service, the price was amazing too. ... more
Ann G.
February 15, 2012
I wanted to thank you, not only for being so prompt in sending my order, but for packing it so well. My former supplier was abandoned by me due to th ... more
Tony F.
October 14, 2016
I couldn't believe how quickly the last order came through. Well done - so efficient.
Leeanne K.
March 24, 2015
I have just received my order this morning that l placed yesterday afternoon. Once again like every order l place, Office Toner live up to their promi ... more
Ralph C.
August 19, 2014
I've been using OfficeToner Supplies for the last 4 years and their genuine Canon cartridges have been great and more importantly their turnaround tim ... more
Gavin L.
June 02, 2014
Ordered the Epson 140 cartridges only yesterday to have them arrive at my address at the particular location I specified the very next day. Wonderful! ... more
Allen A.
June 17, 2019
I have Been using Officetoner.com.au since 2010. Can I say a big thank you for your service. when I lived in NSW Newcastle I would get my order next d ... more
More Testimonials  »
Other Products